USA Rare Earth CEO: FPISC Decision and Action by the President and the Administration “a Major Step in Developing a U.S. Critical Minerals Supply Chain”

The action, taken under the FPISC’s authorities as set forth in its founding legislation in 2015, took place on January 15, 2020.  The Round Top Project was nominated as a high-priority infrastructure project by Texas Governor Greg Abbott under his authority as established by Executive Order 13766 (January 24, 2017). The Round Top nomination was accepted by the Council on Environmental Quality, and advanced to FPISC.

Aside from the significant concentration of heavy rare earths (HREE’s) and lithium, the Round Top deposit also includes aluminum, beryllium, gallium, hafnium, uranium, and zirconium – all of which are on the U.S. Government’s Critical Minerals List.  Production at Round Top will contribute significantly to renewable energy applications. The rare earths and lithium are essential to electric vehicles, solar and wind power and efficient lighting, while aluminum sulfate is used in wastewater treatment. The Navajo Transitional Energy Company (NTEC) – with its mandate to support green technologies – is a strategic investor in both USA Rare Earth and TMRC. At the time of its investment in 2019, NTEC’s CEO noted, “We consider the mineral deposits being developed by USA Rare Earth and TMRC to be vital to future battery and other green energy related technologies.”

All told, more than 60% of the materials produced at Round Top will be used directly in green or renewable energy technologies.

“We are pleased to see the President and the Administration take action to encourage domestic production of critical minerals and metals that are essential to green tech, renewable energy and to our national security,” said Pini Althaus, CEO of USA Rare Earth. “This is a major step towards reestablishing a U.S. critical minerals supply chain and moving away from the reliance on China for these materials. With revitalizing a robust and efficient mining sector, through a streamlined permitting process, the President and the Administration are ensuring that the United States is future-ready, and once again an exporter of innovation and not only a consumer.”

“We thank the President, Presidential advisor and Director of the National Economic Council Larry Kudlow and Secretary of the Interior David Bernhardt for their commitment to see the U.S. develop its own sustainable supply of rare earths and other critical minerals. We also commend FPISC Director Alexander Herrgott for his leadership on this issue and his commitment to an unprecedented level of transparency, predictability and accountability to the public, all while ensuring the private sector always has a reliable Federal partner as we advance critical infrastructure projects,” added Mr. Althaus.

“We thank Governor Abbott for nominating Round Top, and for the support our nomination has received from Congressman Will Hurd and Texas General Land Office Commissioner George P. Bush.  Round Top will become a significant economic asset to U.S. manufacturing and technology development, and the innovation economy the U.S. needs to dominate the 21st Century,” said Anthony Marchese, Chairman of TMRC. “This designation by the FPISC marks a critical component of bringing the Round Top project into production in a timely manner.  We are encouraged by the efforts of the Federal government to prioritize the importance of critical mineral self-sufficiency.”

USA Rare Earth, LLC has an option to earn up to an 80% interest in the Round Top rare earth and technical metals industrial minerals project located in Hudspeth County, Texas. Round Top hosts a large range of critical heavy rare earth elements, high-tech metals, including lithium, uranium and beryllium, and is among the lowest-cost rare earth projects in the world.  The Round Top Deposit hosts 15 of the 17 rare earth elements, plus other high-value tech minerals (including lithium) and is well located to serve the US internal demand. In excess of 60% of materials at Round Top will be used directly in green or renewable energy technologies. Round Top contains 13 of the 35 minerals deemed “critical” by the Department of the Interior and contains critical elements required by the United States; both for national defense and industry. For more information about USA Rare Earth, visit www.usarareearth.com 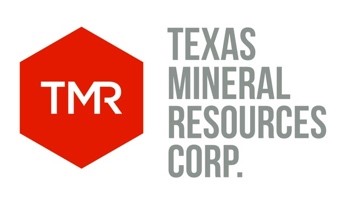 Texas Mineral Resources Corp.'s focus is to develop and commercialize its Round Top heavy rare earth technology metals and industrial minerals project located in Hudspeth County, Texas, 85 miles southeast of El Paso. Additionally, the Company plans on developing alternative sources of strategic minerals through the processing of coal waste and other related materials.  The Company’s common stock trades on the OTCQB U.S. tier under the symbol “TMRC.”

This press release contains forward-looking statements within the meaning of the U.S. Securities Act of 1933, as amended, and U.S. Securities Exchange Act of 1934, as amended, including, but not limited to, statements regarding  the potential development of the Round Top project, estimates and projections regarding the economic feasibility of the Round Top project from the update PEA, including, NPV, IRR, payback period, capital cost, pricing assumptions, mining rate, average recoveries, oxide production amounts and methodologies, mine life, employment requirements, resource amounts and grades, projected revenues, initial capital costs, life of mine sustaining capital, cash flow projections, capital and operating cost estimates and projections, and sensitivity analysis, inclusion of uranium in future economic analyses, the potential to render high purity oxides, the Round Top facility generating critical technology oxides, release of the full PEA within a short period of time and other such similar statements. When used in this press release, the words “potential,” “indicate,” “expect,” “intend,” “hopes,” “believe,” “may,” “will,” “if, “anticipate,” and similar expressions are intended to identify forward-looking statements. These statements involve known and unknown risks, uncertainties and other factors which may cause the actual results, performance or achievements of the Company to be materially different from any future results, performance or achievements expressed or implied by such statements. Such factors include, among others, uncertainty of mineralized material and mineral resource estimates, risks to projected and estimated economics not reflecting actual economic results due to the uncertainty of mining processes, potential non-uniform sections of mineralized material, potential mining hazards and accidents, changes in equipment and labor costs, changes in projected REE prices and demand, competition in the REE industry, risks related to project development determinations, the inherently hazardous nature of mining-related activities, potential effects on the Company's operations of environmental regulations, risks due to legal proceedings, liquidity risks and risks related to uncertainty of being able to raise capital on favorable terms or at all, as well as those factors discussed under the heading "Risk Factors" in the Company's latest annual report on Form 10-K as filed in November 2018 and other documents filed with the U.S. Securities and Exchange Commission. Except as required by law, the Company assumes no obligation to publicly update any forward-looking statements.

New findings from the Neotropics suggest contraction of the Intertropical ...

Please complete the form. Your password must be at least 8 characters long.

Please enter your email address and we will send you link to reset your password.

Please complete the form. Your password must be at least 8 characters long.